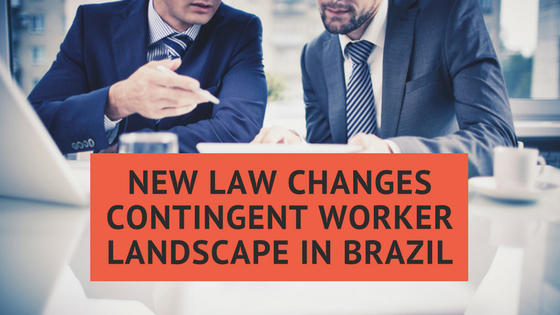 On March 31, 2017, Brazilian President Michel Temer signed a law that will significantly alter the contingent worker landscape in Brazil.  The statute is one of the government’s initiatives to modernize Brazilian labor laws in an effort to align itself with current business practices elsewhere.  These changes have been proposed in Congress periodically for nearly 20 years and were always defeated by its opponents on the left, until now.

While Brazil is Latin America’s largest economy, the country has been mired in a deep recession since 2014 and has an unemployment rate in excess of 12%.  Backers of the new law believe it will decrease costs of employment in Brazil and create a more competitive environment for companies, increasing growth and decreasing unemployment.  Brazil’s employment laws have not been changed significantly since the 1950’s and the cost to employ workers has significantly exceeded its neighbors’.

Pride has been on the ground in Rio de Janiero and Sao Paulo since 2012, providing recruiting and training services in-country.  We believe the time is right for global companies to take another look at opportunities to expand in Brazil, the world’s 5th largest country in population and 9th largest in GDP. Our local expertise makes us the ideal partner for global firms considering taking advantage of this new, contingent-friendly environment.

You can find out more about which cookies we are using or switch them off in settings.

This website uses cookies so that we can provide you with the best user experience possible. Cookie information is stored in your browser and performs functions such as recognising you when you return to our website and helping our team to understand which sections of the website you find most interesting and useful.

Strictly Necessary Cookie must be enabled at all times for core functionality of the site and so that we can save your preferences for cookie settings.

We use Jotform for most of our forms and they do create cookies that are necessary for the site to work. Please view their privacy policy here.

If you disable this cookie, we will not be able to save your preferences. This means that every time you visit this website you will need to enable or disable cookies again.

This website uses Google Analytics to collect anonymous information such as the number of visitors to the site, and the most popular pages.

Please enable Strictly Necessary Cookies first so that we can save your preferences!